So! Summer holidays are well and truly over! The kids are back to school and it’s now safe to venture into shopping centre mid week again. Thank the Lord! I took a well needed break from pretty much everything and am ready to close this year on a high.
So back to business. Uni officially starts for me on Tuesday 29th September and today I received my timetable for the induction fortnight. A little while ago I posted my “shopping list” and I’ll give you an update on that later. (It’s looking good!) You may have also spotted my desk in the Instagram feed below but I’ll be posting more details about my home office and study area set up later on.

I’ve literally spent the past few weeks networking with some freshers from my uni and building a little Whatsapp group and trying to organise my life. It’s going well I think. I’ve devised a working pattern based on a sample timetable I got from someone going into year 2 and so far it’s looking promising. If I can stick to it, I might have time to sleep 😆 But seriously, I’m feeling so refreshed and motivated to get things done and I’m not prepared to lose momentum! I’ve invested in a Me and My Big Ideas Create 365 Happy Planner to help get me organised and it is working so well! At the moment I just map out my week and appointments but I intend to include meal plans and build in some sort of study plan aswell. I’m slowly easing myself into the world of planning (it’s actually quite a big thing!) and have started a little collection of washi tape, stamps and stickers already. Go me! Anyway watch this space as I’m getting a bit obsessed haha!

So where am I now and how do I feel about it? Honestly? I’m in a good place. I’m happy. Even typing this, I’ve had to stop and think “am I really happy or am I just saying it because I don’t want readers to think I’m a sad wreck?” I can hand on heart say, life is good. It’s not without its challenges, but life is good. I remember being a fresh-faced 16 year old, making what I thought were over ambitious plans for myself but not really having much focus. 10 years later and a mixture of life and love has seen me go down different paths. I’m a 26 years old, single mother to THE most amazing 5 year old (we’ll come to him another time), I have a great job and career that I love and am about to embark on the next chapter of my life that will see me finally go to university. As it goes, if I died tomorrow, I would be proud of what I’ve accomplished but I want more. For those that have read my post on “Starting a Business”, you’ll know I’m a massive advocate of writing a business plan and reviewing it regularly. As far as I’m concerned, my life is my business so you better believe I have a plan! I’ve reviewed it regularly, sense-checked my progress and often changed it in response to life events and different paths I’ve found myself on. At 16, I had no idea what I wanted to do. I knew I was going to do A levels and wanted to work in either Law, Banking or Medicine so opted in to Maths, Chemistry and Biology. Although I’ve always been quite smart, I quickly discovered I lacked drive and motivation and only now realise it’s because I didn’t know what I wanted to do. I was stuck in that common rut of “I have to continue my studies but I have no clue what I’m doing”. Towards the end of the first year, I applied for a “summer job” at a bank and then decided to stay and take a gap year. That gap year lasted 9 years (whoops!) but my goodness I needed it! During that time, I set myself a goal that my salary must always be higher than my age. Simple, maybe somewhat shallow, but a goal is a goal and it’s kept me on my toes. In those 9 years, I’ve climbed and bank hopped to my current position and built up a nice little knowledge bank but also professional network. Whilst my work has given me a lot of exposure to the legal profession, I’ve found my interest in the law has come mainly from helping friends and family out of tricky situations so it was only right that I consulted my trusty “life plan” and see how I could further develop myself. To date, I haven’t documented my plan but as Habbakuk says, “write the vision, and make it plain…” and so this week, I’m off to buy a journal to write down my vision for my life that I can regularly review and support with affirmations and wise words. In terms of detail, I’m not sure how deep I’m going to go with it, but I’m trying a lil thing!

For some strange reason, I’ve been waking up around 5am every morning this week with ideas for new blog posts.

To put this in perspective, I’m definitely in a ‘long term relationship’ with my bed. We’ve got a thing going on. Definitely. I recently discovered my 5 year old son can make his own breakfast and boy oh boy has this worked to my advantage! I don’t set an alarm because I’m cranky if woken out of sleep. Instead, I let myself wake up naturally, which prior to this week, has always been just before or bang on 8am followed promptly by me prodding my son to get up, brush his teeth and make his breakfast. Smooth. This little discovery has earnt me an additional 10 minutes in bed every morning! Not to be knocked!

So back to this early morning thing. I feel as if I’ve given myself a reason to wake up early in the morning and honestly, I think I like it. In a post further down about my imminent university start, I mentioned that I need to plan and get organised and you know what, my body agrees! I’ll be working full time and going to uni full time in the evening and was getting some advice from a solicitor friend of mine. She told me that by the time I get home from uni after also having a long day at work, my brain will probably need a break and I might find it more beneficial to go home, chill and get up early in the mornings to study with a fresh head. Whilst I absolutely loved the idea in theory, I just couldn’t see myself ‘breaking up’ with my bed. We’ve been through so much! But in all seriousness, this blog has given me a reason to wake up early. It’s kickstarted a new routine for me and I intend to fully embrace it!

So whatever goals you’ve set yourself, think about what needs to change or improve in your life to make it happen and then more importantly, effect that change! We have all been given a purpose and a design for our life but it’s up to us individually how far we go towards reaching our true potential. Whether it’s changing your morning routine like me, removing certain people from your life or even healing broken relationships, start doing what you need to do to make your ambitions a reality.

Next on my list: eat breakfast before leaving the house. Pray for me looool. I’m on a journey 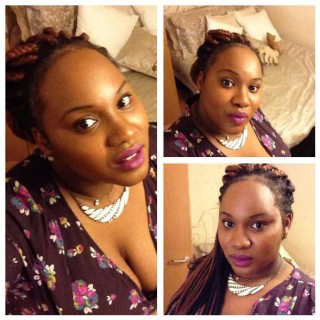